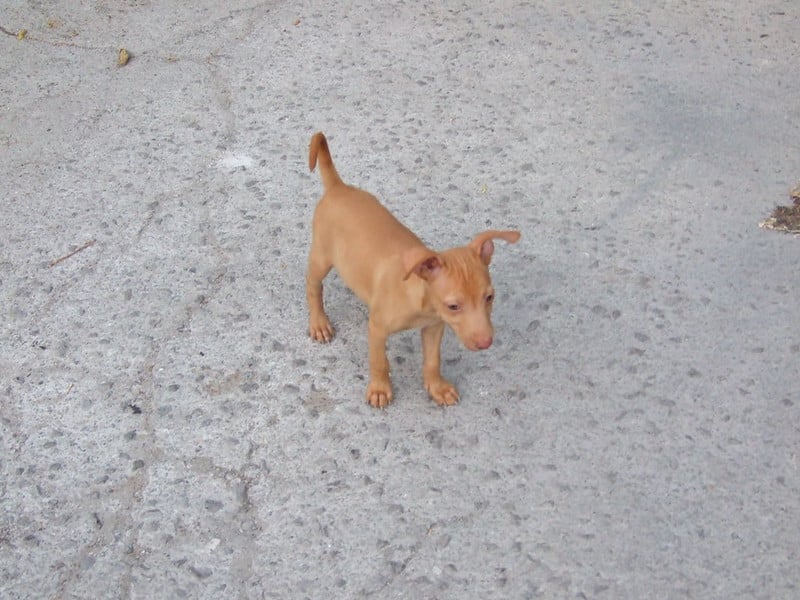 Ever since I was a teenager, I’ve been fascinated by the Cirneco dell’Etna race of dogs (that I’d seen a photo of). Like a lot of people, I love the way it looked without really knowing what type of dog it might be. This is a mistake that many people make when adopting a dog.

Back then, we were living in a small apartment in Paris, and it was simpler to have cats rather than a dog. When Kulfi – our last cat – died, we were so devastated that we remained without a pet for a couple of years.

Then, in July 2012, we decided to go on holiday to Sicily with our friends Sabine, Manu and Zoé, and going to the island brought back my interest in Cirnechi (the plural of Cirneco!) After a little hesitation, and without really knowing what we were getting into, we decided to adopt a Cirneco puppy.

We didn’t want a show dog, and through a friend we got in contact with a family of Sicilians whose Cirneco has just given birth. Our dog was to be a real farm dog, with parents that were hunters…

We made a lot of mistakes bringing up Aitch, and the first was choosing a puppy from just a photo, without knowing anything about his character and temperament. Now that I’m a dog educator, I realise what a terrible decision that was, but there wasn’t much choice.

Cirnechi are hunting dogs, ‘primitive’ dogs with their origins in Egypt, from where the Phoenicians exported them to southern Europe (Sicily, Malta, Sardinia, the Balearic Islands, Spain…)

So, we left for our holiday in Sicily in July, and on the 25th – the beginning of our holidays – we drove to Palermo to meet up with the owner of the litter.

These photos were taken within the first few hours of having Aitch. We were already in love 🙂

We did all the official paperwork – microchip, passport etc. and Aitch was now ours…

Suddenly we realised that we had a puppy an now knowledge about how to handle it, no information about the race, about Aitch’s history…

We spent two weeks on holiday, making a dozen mistake every day, and these were to have a long-lasting effect on Aitch’s behaviour. Nevertheless, we were happy, and completely gaga over our new puppy.

Having Aitch in our lives changed things radically in a way we could never have imagined.

We had to get used to and understand what a dog was, its needs… We discover a race of dog that we had only ever seen before in drawings and photos, and attempt to educate Aitch as best we could…

We searched for professional help, but only found charlatans with techniques that were very, very wrong for Aitch. This had a disastrous effect on the way he behaved and responded to us.

Very quickly, we came to understand that living in Paris was not compatible with our life with Aitch…

We took our role as doggy parents very seriously and spent a lot of time looking after Aitch’s needs. Because of his problems, I started to read a lot about educating dogs, realising that his environment and the methods we had been told to use did not take into account his character.

Little by little, we started spending almost all our spare time walking him in forests near Paris. We stopped clubbing, we got up early… A lot of our friends thought we had gone mad. Other, like Véronique, embraced the change and came with us :-).

We eventually met people who helped find ways to help Aitch’s behavioural problems, but often these only served to confirm that Aitch place was not really in Paris, near the Canal Saint-Martin.

In turn, little by little, the idea grew that perhaps I shouldn’t be there either. I was thinking more and more about becoming vegan, the pace of city life became more and more wearing, and I felt an increasing need to downsize and simplify things.

Jason took a bit more time to come round to these ideas. Leaving a city like Paris after 25 years and going to live in the countryside is a big step, after all.

However, circumstances sped up the process a little, and leaving my job at the hotels was the tipping point.

We left Paris to live in Normandy for a year. It was an amazing time, during which I learned so much, thanks to Nicolas Cornier and Bérangère Roignant.

We really enjoyed our time in Sées, and Aitch completely changed over the year, thanks to his new life in the countryside.

After returning from Normandy, we were ready for our big change, and now here we are at Can Pit-Roig with three dogs, in the middle of nature and super happy!

All that thanks to a honey-coloured dog.